International conference
„US-Serbia Partnership: How to Use History for a Better Future?“

An international conference on ‘US-Serbia Partnership: How to Use History for a Better Future?’ was held at the Faculty of Political Sciences on June 7 and 8, 2018. The conference was organized by the Center for Social Dialogue and Regional Initiatives and the Center for United States Studies at the Faculty of Political Science, with the support of the US Embassy in the Republic of Serbia.

The dean of the Faculty of Political Sciences, Prof. Dr. Dragan R. Simić, US Ambassador to Serbia Kyle Scott, and Stevan Nedeljković, director of the Center for Social Dialogue and Regional Initiatives spoke at the opening.

The dean of the Faculty of Political Sciences Dragan R. Simić stated that this conference was the final part of the project that took place over the past nine months, and represents the peak of researching into American studies and Serbia’s relations with the United States. ‘Our relations with America, despite a difficult and bad decade, have in principle been full of understanding throughout history. There are a handful of positive situations during our cooperation in the Balkan wars, World War I and World War II,’ Simić explained. He added that the American people truly valued the Serbs, which was proved by the Serbian flag on the White House on July 28, 1918. 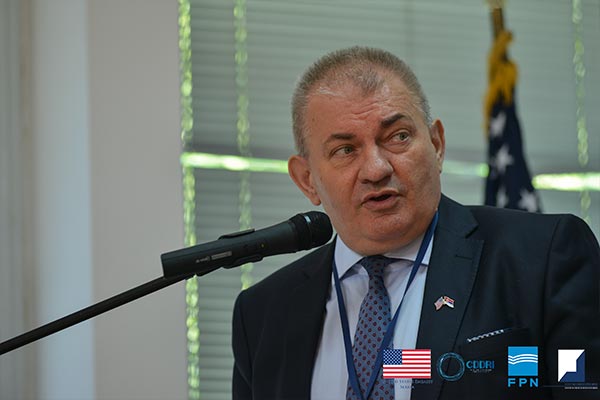 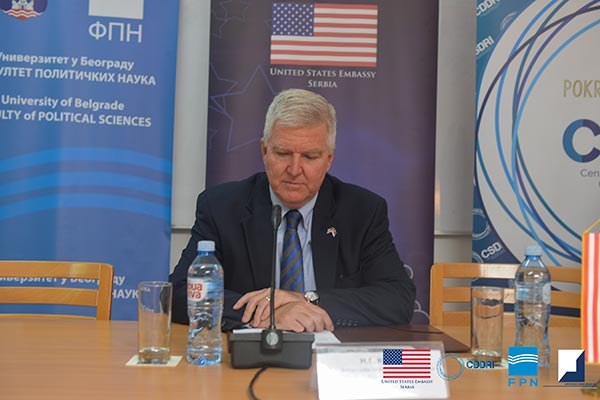 Kyle Scott pointed out that we are facing many crises today, such as those in Syria and Iraq. The number of crises is large and therefore we do not have the luxury of just watching what is happening in the world. ‘The EU is our great ally and America recognizes the core values ​​of the European Union, such as democracy, prosperity, and freedom of expression,’ Scott said. He stated that America supports Serbia’s entry into the EU, emphasizing that our two countries have been allies for a large part of history and that we should continue to build better relations.

The director of the Center for Social Dialogue and Regional Initiatives, Stevan Nedeljković, referred to 135 years of diplomatic relations between Serbia and the United States. ‘We tend to think that we know everything about the relations between our two countries, which is miles away from the truth. With this project, we wanted to resolve certain dilemmas and shed light on what actually happened, ‘ said Nedeljković. He concluded that a lot of positive things have been forgotten, and we should be proud of the history, because if we are not ready to learn from history, then we do not deserve a better future.

The first panel was on the topic ‘U.S. Foreign Policy in the Trump Era – America First = America Alone?‘. The dean of the Faculty of Political Sciences, Prof. Dr. Dragan R. Simić, and the dean of International Studies at Bard College James Ketterer spoke at the panel. The panel moderator was Milan Krstić from the Faculty of Political Sciences in Belgrade.

Prof. Dr. Dragan R. Simić emphasized there was a big gap in Trump’s actions between rhetorical presentation and action. ‘Donald Trump has many times relativized some threats, which is the behavior characteristics of a businessman. The focus of his actions is exclusively on short-term profit,’ Simić pointed out. At the end of his speech, he referred to the fact that it is still very early to make final conclusions about Trump’s strategic moves because less than two years have passed since he was appointed president.

The dean of International Studies at Bard College James Ketterer finds it difficult to reconcile political opinions in America as perceptions vary from state to state, but also from place to place. ‘Donald Trump did not appear out of nowhere, he is not a problem but a symptom of wider ecstasy. It is up to all of us to understand the meaning of the complexity of that wider ecstasy ‘, Keterer stated. He listed the tendencies that existed in the United States even before Trump, and how he continued them.

At the second panel that analyzed the history of Serbian (Yugoslav)-American relations from the end of the 19th century until today, some of the most eminent Serbian historians in this area, as well as a guest from the United States spoke. Professor Ljubinka Trgovčević talked about the relations between Serbia and the USA in the second half of the 19th and the beginning of the 20th century.

After her, Slobodan G. Markovic, a professor at the Faculty of Political Sciences, analyzed the main characteristics of Serbian (Yugoslav)-American relations in the 20th century, from the end of the World War I to the break-up of Yugoslavia in the 1990s. Radina Vučetić, a professor at the Faculty of Philosophy, spoke about the influence of the United States in the field of culture and the so-called ‘Americanization’ of Yugoslavia and Serbia in the 20th century, while Phil Tiemeyer, professor of history at Kansas State University, analyzed the impact of civil aviation on relations between the two countries in the second half of the 20th century.

‘The main issue at the moment is the normalization of relations between Belgrade and Priština, and when that is resolved, I think that the relations between the United States and Serbia will take an upward path,’ said Aleksandra Joksimović, who is currently Serbia’s ambassador to the United Kingdom. She points out that the changes at the end of 2000 were a key turning point in the US- Serbia relations.

‘The long-term US strategy is to maintain peace and stability in Europe and implement democracy, but today there are many problems in applying democratic principles,’ said Professor Ivan Vujacic, our country’s ambassador to Washington from 2002 to 2009. He explains that we are trying to balance between the West and the East as in the time of Yugoslavia, but that it is impossible because things are not the same.

‘The narrative, which is negative towards the US, is the context toward which we move, and it limits our actions and possible cooperation,’ Dragan Živojinović pointed out. He adds that our relations with the United States could be at a far higher level.

‘Trump’s Administration and the Western Balkans – New or Old Politics’ was the topic of the last panel discussion presented by James Seroka from Auburn University, David Dilman from Abilene Christian University, and Dragan Đukanović from the Faculty of Political Sciences, University of Belgrade.

‘Although I have political experience, it is difficult for me to follow the current course of US diplomacy and the Trump administration,’ admits Professor Dilman. If there are a lot of lies and untrue and unpredictable information, then it certainly opens up space for imagination, explains David Dilman.

‘The current president of the United States is leading a campaign of propagating primarily national interests and is turning to resolving internal issues, which is why his strategy in the Balkans is not organized and predictable,’ James Seroka emphasizes. According to him, the bearers of the US policy in the Western Balkans countries are the embassies and their representatives, the most obvious example being Albania and Montenegro, where the American influence is great.